The iconic French house Balmain and L’Oréal Paris are teaming up to create a capsule collection of 12 iconic lipsticks from the cosmetic brand, declined in twelve new Riche color shades, themselves created around three color themes called « tribes ». Each product is represented by a model in a campaign unveiled on Monday, August 21st. 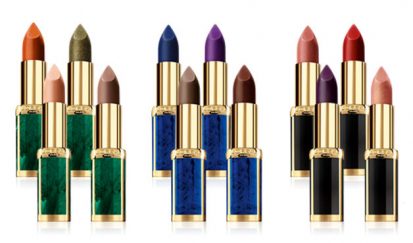 Three lines are offered for this collaboration: « Glamazone », recognizable by its green case, declined in khaki, beige, brown and orange; « Rock » and its blue case featuring a dark brown, gray, electric blue and purple; last but not least « Couture », symbolized by a black packaging, with a red, purple, coral and golden pink.

According to Olivier Rousteing, artistic director of the Balmain house: « L’Oréal Paris and Balmain share the same vision of femininity and the same mission: to celebrate women and allow them to freely express their style and personality. With this collaboration, I am pleased to be able to bring this ambition to life for women around the world. »

To get the limited editions of these lipsticks, you will have to wait until September and one of the most emblematic weeks for fashion: the Spring-Summer 2018 Fashion Week. The complete collection will be available in a limited number of points of sale. As for its three star shades, they will also be exhibited in the Balmain stores in Paris.

It is undoubtedly the ideal make-up accessory to become part of the Balmain Army, the muses army of the creator.