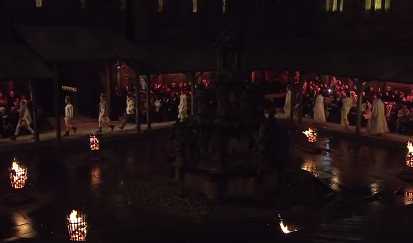 Last Tuesday,  Chanel’s « les métiers d’Art »fashion show was held in the castle of Linlithgow, Edinburgh.
Every year, the Kaiser offers a show in addition to the traditional calendar fashion shows to honor and showcase all the workshops of artisans (embroiderers, feather workers, lace makers) that are not talked about enough. After Byzantium, Shangani, Moscow and Mumbai last year, it is in Scotland that the fashion  house is inviting us (the brand just purchased a Scottish cashmere company).

In the castle of Mary Queen of Scots at nightfall, the distinguished guests (Poppy Delevigne, Amira Casar, Anna Mouglalis) arrive bundled up in coats from the fashion house on the Rue Cambon, under a red light reminiscent of the fire which devastated the castle in the eighteenth century.

With its haunted house atmosphere and memories of the past, the stage is set!

But the first figure quickly reminded us that it is a fashion show that they came to attend. And it is Stella Tennant (daughter of the Duke of Devonshire, cousin of Lady Di) owner of the land that opens the ball.