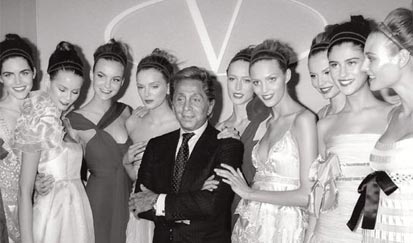 A love for Paris

In May 1968, ask when the world’s investors, viagra frightened by the uprisings of the moment, thought only of fl eeing Paris, he opened his boutique at 42 Avenue Montaigne. In April 1975, near here in the salons of the Hotel George V, he presented his Fall-Winter prêt-à-porter collection. Audacious, to say the least, considering that at this time the Parisian fashion world took a rather dim view of Italian designers. In 1989, his fi rst haute couture collection took over the prestigious Ecole des Beaux-Arts.
Finally, on January 23, 2008, on a crisp, magnifi cent evening in the moon-lit gardens of the Rodin Museum, Valentino presented the fi reworks of his latest collection to a privileged public. If Valentino symbolizes the essence of Italian elegance, he also managed to establish a very special relationship with Paris and succeeded in assuming a prime place among the city’s greatest couturiers.

In fact, this love affair with the City of light goes way back. Born in 1932 in Voghera, a little city in the Italian region of lombardy, Valentino Garavani knew very early what he wanted to do in life. legend has it that even as a child, he pleaded with his mother – who had named him for the greatest actor of silent fi lms – for custom-made clothing. In school, he created outfi ts for his young classmates. Even before he was legally of an
age to direct his own destiny, he announced to his parents his ambition to become a fashion designer. Despite the initial shock, above all for his father, director of a company specializing in electrical equipment, his parents accepted his vocation. And even more, they would support him in every step of his ascension.

At the beginning of the 1960’s, when his workshop was forced to move from rue Condotti to via Gregoriana due to fi nancial diffi culties, his parents sold their country home to bring new capital into his company.

Via Condotti, Via Gregoriana, Palazzo Mignanelli: Valentino’s addresses sing of Roman geography. the child of lombardy had fallen in love with the Eternal City. Following a frenzied apprenticeship in Paris at the age of 20 when he entered the Ecole de la Chambre Syndicale of Parisian Couture, then worked with Jean Dessès, onassis’s favorite designer, before collaborating with the young Guy laroche, he returned to Italy in 1959. He was 27 years old and had acquired proven techniques and an unequalled sense of beauty. A fundamental encounter, which, according to the anecdote, took place in
a café on the Via Veneto, marked the beginning of the 1960’s. It was with a young architectural student, Giancarlo Giammetti, who would turn out to be a matchless strategist.

He took the reins of the young company, and would remain for more than half a century at his extraordinary parable, taking it ever higher up the ladder to fame and making Valentino a household world around the planet.

From 1962 on, Valentino began to make his mark. Invited at the last minute to participate in the fashion shows held for several years in Florence in the rooms of the Pitti Palace, he fascinated the Italian observers, but also foreigners. He often showed his creations at the end of the shows, but America remembered them. And he knew that America was a continent to cultivate. He went there often and succeeded, with the help of a mutual friend, in meeting Jackie Kennedy.

In 1964, the day after a public presentation at the Waldorf-Astoria Hotel, a private showing was organized. the president’s widow fell under the spell of his bi-color collection and asked for all of the models. While other designers struggled to be recognized, Valentino’s celebrity was immediate. His friendship with one of the most glamorous personalities of the time opened doors and made him, at barely 30 year’s old, the alter ego of the great Parisian names.

the bond with Jackie Kennedy continued even after she became Jacqueline onassis. on the island of Skorpios, october 20th 1968, one of the most fashionable events of the decade took place: the marriage of the American muse with the most powerful of Greek shipowners, Aristote onassis. the bride wore a lace dress and a crêpe skirt that would be seen around the world. they were strictly white. like Courrèges, Valentino favored the simplest and purest of colors. But his love affair with colors doesn’t stop here, and if Valentino is remembered today, it is often for his poppy red. this shade is the exaltation of a memory of his youth: During an evening at liceu, the opera of Barcelona, the fl amboyant dress of one of the spectators would leave its indelible mark.

Even before he had reached the age of 40, Valentino was a global star and had accumulated prizes such as the Neiman Marcus Award, the highest American distinction of its kind, presented to him in 1967. But after such a booming beginning, the hardest was, perhaps, to come: that is, to remain at the summit for decades. He succeeded in doing this by establishing himself in the great fashion capitals – Paris, as we have already seen, but also Milan – and also by never ignoring the signs of the times. In 1978, he launched his perfume, baptised simply Valentino. He designed the uniforms of Italian athletes for the olympic games in los Angeles in 1984, joined the fi ght again AIDS with Elizabeth taylor, frequented great museums and movie studios, holding fashion shows at the Metropolitan Museum of Art in New York and at 20th Century Fox in
Hollywood. living in homes of rare refi nement, a remarkable collector, a regular visitor to Capri and Saint-tropez, Valentino became an indispensible personality of the jet-set.

An obsession for elegance

But for the challenge of remaining at the summit, he would succeed by the simplest
of methods: his talent. the chronology of Valentino marked the styles of the second
half of the 20th century and can be summed up by unforgettable milestones:
the Sarabanda cocktail dress with bouffant skirt (1960), to suits in pink tulle with origami motifs (2008). Dalmatics with prints inspired by African animals (1966), were precursors, showing an early concern for the environment, while the evening gowns in silk voile printed with orchids (1988) illustrated the variety of his taste for fl owers. Virtuoso in the use of embroidery and sequins, Valentino also produced dresses set with extraordinary ribbons of silk crêpe called budellini (1993). the Valentino style was forged over decades with just one goal: to dress women in timeless elegance.

Chiuri and Piccioli: a new age

When Valentino Garavani decided to retire from the world of fashion at the end of 2007, the succession was not easy to assure. Nonetheless, the transition from the master to his disciples was a gentle one. the Roman duo that presides today over the creative destiny of Valentino already has a long history with the fi rm. With a diploma from the Institut Européen de Design in Rome, Maria Grazia Chiuri and Pier Paolo Piccioli began by creating some of the most remarkable handbags of the Fendi trademark before Valentino asked them to create a line of accessories in line with his style, in 1999.

Glasses, handbags, shoes, jewels, shawls and suitcases saw the light of day in coming years, all with elegant design, an assured sophistication, and perfect fi nishings that became an integral part of the Valentino universe.

Fireworks of the Spring-Summer 2010 Collection

Since october 4th, 2008, Maria Crazia Chiuri and Pier Paolo Piccioli have been the
Creative Directors of the Maison Valentino. their original style, with its rich creativity,
is perfectly portrayed in the Spring-Summer 2010 prêt-a-porter collection. this new
collection upsets perspectives and priorities. the Valentino woman has a dangerous
charm, unexpected and unsettling. Delicate embroidery and lace take on a shiny touch
and the fabrics become precious substances. A play of light and shadows, the dialectic
of languages that seem paradoxical – art and craftsmanship, fi ction and reality – come
together in this new collection that renews the Valentino spirit in a dream-like dimension. It is the birth of an unanticipated Eden where dresses metamorphose into mysterious night fl owers that tremble magically in an imaginary breeze.