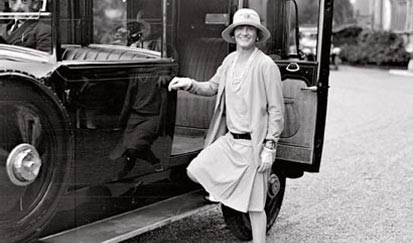 ln fashion, ailment you know you
have succeeded when there
is an element of upset.

Be unique, set a distinctive course

“To be different, you need to be irreplaceable,” said Mademoiselle Chanel, the legendary designer, whose vision of modernity combined luxury with the intelligence of practicality – and revolutionized women’s wardrobes. Concentrating on the essence of a style and using a selection of iconic references, Chanel proclaimed her signature codes from the 1920s onward: the chainlink shoulder bag, the camellia, tweed, the two-tone shoe, the little black dress and pearls – these, her inimitable trademarks. “Fashion passes, but style remains,” she liked to recite.

Today, Karl Lagerfeld, the magician of perpetual renaissance, cultivates this heritage by uniting it with the modern era. “I have a certain number of notes – I play
with them. This is my tune of the day or night”.

The company’s classic handbag became part of the legend in February 1955, subsequently earning the name ‘2.55.’ It is the personification of Mademoiselle Chanel’s obsession with liberating women and her desire to blend functionality and her chic aesthetic sense – all, realized in the singular style of this handbag. How did the ‘2.55’ evolve? From her observations of military bags with straps, and from the way she liked to carry her binoculars on the racecourse – with her hands in her pockets, like a man. In 1929, she transformed a military bag for her own use, covering it with black or navy blue jersey, and lined it in grosgrain. In February 1955, quilted leather, a mythical chain braided in leather and brass, a top-stitched double C, a rotating clasp and specially-designed pockets became the hallmarks of the most famous handbag in the world. A total of 180 precious operations are necessary to manufacture it.

Today, Karl Lagerfeld has modernized it with new variations and a cornucopia of unexpected fabrics, including denim, PVC braided with metallic leather and ‘croco’ embroidery.

Mademoiselle Chanel’s relationship with the Duke of Westminster at the end of the 1920s inspired her taste for tweed jackets – the foundation of casual elegance – and she incorporated them into her personal aesthetic. The material of male wardrobes became firmly fixed in her memory. In 1956, she re-opened the House of Chanel and responded to the heightened femininity of the conventional New Look with a modern and timeless femininity infused with masculine values.
She revived tweed, changed it slightly and used it in endless combinations for

her supple, emblematic suits – a perfect, classic blend of masculinity and femininity. Distinguishing marks? Flexible construction, signature braiding, silk lining for greater fluidity, fine chains sewn into the hem for a flattering silhouette, and Scottish tweeds, which were lightly washed to preserve their softness. Today, legendary suits are reinterpreted with just the right dose of irreverence by Karl Lagerfeld

The two-tone shoe taken from sport

On the Duke of Westminster’s yacht, Mademoiselle Chanel’s visionary eye took note of the men’s shoes, which were made of natural canvas with black leather tips. Leaning on the shoulder of the dancer and choreographer Serge Lifar – a cult figure in 1937 – she, who had always been the model for her own designs, was the picture of modernity – wearing a black top, white trousers and thick-soled sandals with black tips. In 1957, the liberated woman, who liked to “do the right thing at the right time,” once again suggested a break with tradition, at a time when couturiers were matching clothes with shoes – and a shoe with an open back did not exist. The two-tone graphic sandal had only just begun its irresistible ascension.

Obsessed with comfort, Chanel liberated the foot using a small elastic band on the inner edge and gave her footwear design a black tip – once again, referencing the boating shoes. In addition to the practical aspect of hiding stains, the black tip also made the foot appear smaller – while the beige portion of the shoe made the leg look longer. Graphic aesthetics combined with common sense. “We can go around the world with four proposals,” she was known to say. In a pragmatic way, she offered beige leather with a black tip for day, a navy blue tip for the summer version, a brown tip for the sports version, and a platinum-gold tip especially for the evening. Under the creative impetus of Karl Lagerfeld, the legendary two-tone concept can be found in ballerina flats, boots and tweed thigh-high boots.

The camellia the discreet icon

Mademoiselle Chanel was enamored with the East, and her favorite flower – the camellia – once called the “Japanese Rose.” The symbol of long life and fertility and an emblem of immortality, it is also said that the camellia banishes evil spirits. With its pure simplicity and almost symmetrical roundness, the white bloom is the perfect counterpoint to her legendary little black dresses. Making it even more compelling, the camellia is a flower without fragrance; therefore it did not overpower N°5, which the dressmaker wore without fail. The camellia was also the flower of two courtesans, two free women – the Lady of the Camellias and the heroine of La Traviata. In Chanel’s own apartment on rue Cambon, white and pink camellias decorated her beloved black and red Coromandel lacquer folding screens.

“They play the role of Middle Age tapestries; they make it possible to recreate one’s house everywhere,” said the audacious designer. In order to shape the flower and sculpt it to the right volume, couturiers cut the petals into the shape of a heart and emboss it with the pistils in the center. Displayed in a range of materials and colours, the camellia requires 40 minutes of skillful handwork to beautifully materialize and decorate the clothing and accessories..

Reacting to the flood of colours in the 1920s, Chanel the rebel once again denounced the status quo and declared the supremacy and perfect simplicity of the colour black – which, until then, had been reserved for mourning. The little black dress enveloped the body, removing the corset’s restrictions, and established a new silhouette made of jersey – a material borrowed from men’s underwear – crepe or lace. Americans sang her praise and christened the dress the “Ford of Chanel,” its surprising success parallel to that of the legendary car with its modernity in accordance with the era. “Always taking away, and never putting back,” repeated the enthusiast for minimal perfection. She also said, “I’m going to dress them all in black to teach them good taste”. As a counterpoint to her little black dress, she created an abundance of baroque-style costume jewelry that became a line in its own right.
Karl Lagerfeld has never forgotten the impact of the little black dress, and has rendered it in chiffon and knitwear, as well as in spectacular silk scattered with giant camellias.

The portraits of Mademoiselle Chanel, exuding charisma and draped with multiple layers of jewelry, are striking. Whether they are signed by Man Ray or Cecil Beaton – the leading photographers of the time – the portraits show the ability of the intense and luminous strands of pearls to make a simple black dress sublime when thrown on in an anticonformist manner. Of course, pearls became the highlight of her legendary black dresses, creating a look that would never go out of style.

Mademoiselle Chanel spoke of the quality of pearls, as flattering as makeup, with nuances of simplicity, brilliance and absolute purity; they chicly addressed the challenge of illuminating and
enhancing the streamlined elegance of her fashions. Pearls continue to adorn handbags, shoes, glasses, belts and clothing with their luminous presence, and have even graced a line of makeup.

2007. CHANEL celebrates 20 years of watchmaking and 5 years of presence at the prestigious international watchmaking fair, Baselworld. Two very significant and emblematic dates immortalized by exclusive and exceptional creations. Ever since the launch of the “Première” watch in 1987, CHANEL has been developing a watchmaking world in a league of its own. Following fashion and fragrance, make-up and skincare, this third pillar of CHANEL, is in a constant state of evolution, gaining strength and experience. So much so that today CHANEL watches can be divided into three families: the Jewellery collection, the “J12” and the “Intemporelles de CHANEL”, where each model is inspired by one of the couture house’s famous symbols. The “Première”, whose rectangular form with cut corners evokes both the shape of the N°5 perfume bottle as well as the Place Vendôme. The “Matelassée” echoes the quilted theme so close to Gabrielle Chanel’s heart. The “Mademoiselle” is instantly recognisable with its white lacquered frame and stretched Roman numerals. And the “Chocolat” is a digital version of the “Matelassée”.

CHANEL brings its watches to life in an 8000 sqm. workshop in the Chaux-de-Fonds in Switzerland. It is there, in between the region’s meadows and pine trees that a creative spark turns these timepieces into innovative products. Cutting edge digital equipment combined with traditional watchmaking savoir-faire guarantees perfection through and through, from the production of boxes and bracelets right up to the casing of mechanisms created and developed by Swiss specialists. In 2000, the “J12” was born, and in just a few short years it has achieved the same iconic status in watchmaking as CHANEL N°5 has in the world of perfume. First in black and then white, in a set, chronograph, tourbillon and then a jewellery version, it has established itself as an international watchmaking reference that continues to evolve over the years. For 20 years CHANEL has marked time by revolutionising watchmaking.

CHANEL Fine Jewellery clearly displays the inherent respect for its values and its deep commitment to the house’s notions of beauty and luxury. The story of CHANEL Fine Jewellery began in November 1932 in the Salons of her hôtel particulier rue du Faubourg Saint Honoré, Paris. It was here that Mademoiselle Chanel presented her first Fine Jewellery collection, “Bijoux de Diamants”, made entirely from diamonds set in platinum. She explained that: “The reason I have chosen diamonds is because they represent the greatest value in the smallest volume”. And, since it emphasises the scintillating value of the stone, she chose the comet as the main theme of the collection.

“I wanted to cover women in constellations, stars! Stars and crescent moons of all dimensions to shimmer
in the hair and the fringe. Watch as these comets’ heads will glitter on a shoulder and their sparkling tails will slide behind the shoulders to explode in a shower of stars over the décolleté…”

Today, as with all CHANEL creations, the Fine Jewellery collection is inspired by the personal history of Mademoiselle Chanel and the symbols that were so dear to her, resulting in enviable creativity and unmistakable identity. Fusing tradition and innovation, the pieces that have established the CHANEL identity are interpreted in a precursory spirit, always innovative thanks to the traditions of French fine jewellers and the savoir-faire of Paris’ top ateliers which use only the most noble materials, purest stones and rarest pearls. More than 70 years on from that first legendary “Bijoux de Diamants” collection, CHANEL has become one of the undisputable