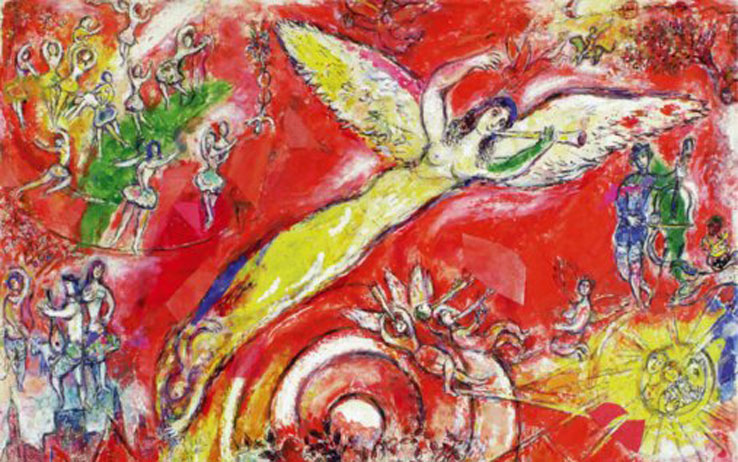 Marc Chagall
The triumph of music

From his early days in Vitebsk, his birthplace in Belarus, to his final home in Saint-Paul de Vence, the life of Marc Chagall (1887-1985) was marked by milestone experiences in which music always played an instrumental role. Music was tied closely to both his family history and the Jewish cultural environment in which he was immersed in his native city, and the omnipresence of music in his world is clear in the costumes and scenery he created for the stage. The Moscow State Jewish Theater (1919-20) and the ballets Aleko (Mexico, 1942), The Firebird (New York, 1945), Daphnis and Chloe (Paris, 1958) and The Magic Flute (New York, 1967) celebrate the monumental scope of his vision (stage sets) and his material technique (costumes).
The massive projects he took on in the 1960s, such as the ceiling of the Paris Opera House (1964) and the decorative and architectural programme at the Lincoln Center in New York (1966), reflect the artist’s concept of ‘total art’. Together, his experiences shaped his desire to give shape to sound, construction and musical rhythm through artistic creations using a variety of techniques: painting on canvas or paper, sculpture, modelling and ceramics, collage, and the designing of costumes and scenery for the stage.
Featuring 250 works from the Musée national d’Art Moderne (Paris), the MoMA (New York), the Tretiakov Gallery (Moscow) and the artist’s family, this exhibition allows one to discover the continuing modernity of Marc Chagall. Presenting the works in reverse chronological order, the exhibition places a special emphasis on the circularity of his art. It immerses visitors in a unique artistic and sensory experience combining artworks, documents, sound and audiovisual elements.
Curated by
Ambre Gauthier, curator
Mikhaïl Rudy, musical director

With the support of the Fondation Swiss Life