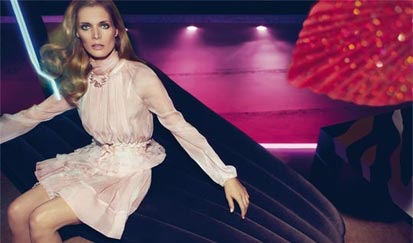 A tribute to the pleasure of finery

When the 1930’s saw Paris decked out in eccentric illusions, nurse Madame Ricci focused on charming, viagra irresistible and delicious femininity. It was very clear for her that it had to be highlighted with quiet elegance. nothing austere, just grace in all its simplicity. enhanced by an ornamental detail or magnified by the richness of a fabric, the main idea came to life and movement in a complex structure.

A figure beloved by Paris society, Nina Ricci had said her adieux after 30 years of creating fashions when her son, Robert, a visionary advertising executive, convinced her to create a couture house in her name. In 1932, it opened on Rue des Capucines. The loveliest silhouettes of French cinema were soon paying the house homage in real life as well as on the silver screen, while Nina was establishing her legend as the White Lady, all in white from the crepe of her dresses to her many ropes of pearls, her sassy curls and her perfect complexion.

Robert Ricci needed a territory to suit his scope, while the Maison Ricci needed an arm to conquer the world. The businessman turned to fragrance and in 1946, created Coeur Joie, an amazing floral-musky scent. With Capricci, Fille d’Eve, Farouche and Nina, success followed success, and the house constantly grew, becoming a worldwide symbol of the quest for Parisian taste. In 1948, an icon took flight on the interlaced wings of two crystal doves: L’ A ir du Temps, whose time would always be right, and marked the beginning of an exclusive partnership between Lalique and Ricci.

In 1959, Madame Ricci moved aside in favor of the talents of the young Jules-François Crahay. he offered a new expression of Ricci femininity, sophistication all in silky

volumes and soft geometry. the press declared a new genius while princesses and members of Café society showed up wearing his Crocus suit. the way was opened for Gérard Pipart, who for thirty-fi ve years would be the virtuoso “hand” of Ricci. Perpetuating the spirit of the great nina, he dressed young goddesses of the big screen and royal houses in fabulously colorful, feminine creations. Show windows created by Warhol and Daniel Buren, collaborations with Sol LeWitt, César and David hamilton: thirty years after the first gouaches by Christian Bérard for L’ air du Temps, Robert Ricci pursued his bold artistic encounters throughout the 1970’s and ’80’s.

The Nina Ricci boutique reopened in September 2008 after a six-month renovation. The 180 square meters was completely redecorated with a combination of styles incorporating the feminine feel of Madame Ricci’s modern Italian spirit and the House’s historic image.

Launched in the Autumn 2009 Collection, the line of handbags features four styles: the Tote, the Hobo, the Shoulder Bag and the Clutch, echoing the timeless elegance of the House, a mix of tradition and modernity. The line completes the wardrobe of the Ricci Woman and provides the basis for a collection that will continue to expand during the coming seasons. Inspired by Botticelli’s muses, the line is a hymn to Nina Ricci femininity.