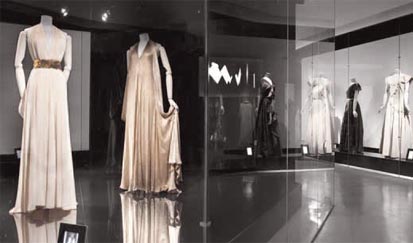 A GIANT IN FRENCH FASHION

Many designers have left their mark on Avenue Montaigne, treat including Jacques Doucet, the Paquin sisters, and Christian Dior. But there is one personality who holds a very special, flamboyant place in the period between the two wars: the great Madeleine Vionnet, whose address was number 50. A famous contemporary novelist, Madeleine Chapsal, knows the designer’s story very well, for a very good reason. “Madeleine Vionnet was my godmother,” writes Chapsal. “My mother was her right arm and thus I knew 50 Avenue Montaigne even when I was still in my mother’s womb. In those days women did not stop working until very shortly before giving birth.

It was in 1925…” 1925, les Années Folles, the art deco revolution. Who could claim to know Avenue Montaigne better?

In praise of the bias cut…

Madeleine Vionnet is known as the grande dame of the bias cut, which she introduced to feminine fashion around the time of the first world war. The epitome of contemporary style, it can be
applied to modern creations such as a threequarter length coat with an ivory silk collar. Madeleine’s other great claim to fame, which continues to inspire today’s designers such as Issey Miyake, is her marvelous pleating, equaled only by that of Madame Grès. It had been fashionable since the turn of the century when the famous dancer Isadora Duncan popularized the draping of ancient Greece. The clothing of Madeleine Vionnet was much in demand by ladies of high society, but also by actresses in vogue such as Greta Garbo and Marlène Dietrich. A pioneer in many areas, she was one of the first fashion personalities to protect her creations with a system of copyright.

What was the atmosphere of this fashion house, the most sought-after in all of Paris? “I still remember the imposing entrance, the doorman with all his stripes. And also, the turntable at the end of the alley. It was a refined inovation so that cars did not have to maneuver in the courtyard…” This was on the cutting edge, but don’t forget the fashion shows. What were they like then? “From the age of three, I attended the collections. It
was not as it is today when runway models are so expensive: at that time, there was a fashion show daily at 3pm. And what a clientele! There were, duchesses, marquises, queens and actresses.” And, one might imagine, a bevy of journalists? “No, not at all. Contrary to today, when everything is over-exposed in the media, journalists where not really welcomed: they were discouraged from attending.”

A beehive of activity

Madeleine Vionnet’s maison was a local empire. It was a source of true fascination for the young Madeleine Chapsal, who brings her memories alive in her book, “La Chair de la Robe.” “A thousand two hundred couturières and seamstresses worked here. There were numerous services provided by the firm for its staff including a doctor and even a dental office! The end of the day resembled a real factory outlet.

There were no side alleys parallel to the avenue for cars, as there are today, but there were large sidewalks. Instead of going straight home, the employees enjoyed strolling down the Champs-élysées.” But war was approaching and everything was about to change. “In 1939, Madeleine Vionnet, already elderly, terminated her lease and closed her firm, even if she had said she would leave it to my mother.”

“I remember the liquidation of all of the stock by a Parisian auctioneer. Even the buttons were sold! I have the soul of an archivist: I saved the documents of this auction.

My mother then opened her own firm under her name,
Marcelle Chaumont, at 19 Avenue George-V and ran it
until 1953. She had only three workshops. That gives you an idea of the magnitude of “50 avenue Montaigne” which had 26 workshops! And there were only a few neighboring boutiques. Dior, for example, had not yet opened.” Madeleine Chapsal still strolls along Avenue Montaigne.

Born in 1925, Madeleine Chapsal is the daughter of the couturière Marcelle Chaumont, who was the right arm of Madeleine Vionnet.

Prolific author (some of her most memorable novels include La Maison de Jade, La Femme Abandonnée, and, to be published this fall, Affaires de coeur and Journal d’hier et d’Aujourd’hui), Madeleine Chaspal was also active as a journalist.

She participated in the founding and development of l’Express magazine with her husband, Jean-Jacques Servan-Schreiber. She has left a wonderful description of the world of Parisian haute couture in “La Chair de la Robe,” which traces the saga of Vionnet.

As a child, she spent her summers at the famous designer’s in Bandol. A half a century later, she succeeded in reuniting all of the surviving workers of the great Madeleine: just in time to gather some last memories of another era, an epoch of dreams.

1914The start of war forces her
to close her firm

1919Creation of the logo
Madeleine Vionnet

1939 Madeleine Vionnet closes her
maison suddenly just before
the outbreak of war.

2006 The name Vionnet, bought in
1988, returns to the runway.
The owners announce the
launching of a new collection
with Sophia Kokosolaki as
Artistic Director.