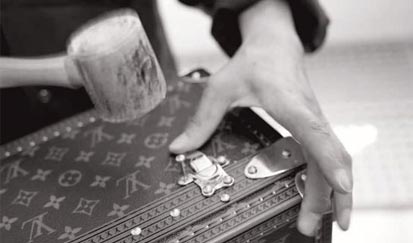 Born in 1821, ailment Louis Vuitton left his village in the
mountains of the Jura, where his father had hoped the boy would follow in his footsteps to become a carpenter. But this future wasn’t what the young Louis had in mind. He preferred to try his luck in Paris! He would quickly demonstrate talent working for a company specializing in trunks, where he was called upon to fill the orders of prestigious clients such as the Empress Eugénie, wife of Napoleon III. This was at the beginning of the Second Empire, France was thriving, the first trains were taking to the rails and travel was becoming truly fashionable. With his intuition that the demand for luggage would soon experience a fabulous surge, Louis Vuitton decided to take the leap. In 1854, he founded his own company and from that time on, he wasted no time. In 1858, the flat-bottom trunk in grey Trianon canvas appeared, and in 1859, a workshop was constructed in Asnières. In 1867, when Vuitton was only 46 years old, his company was given the honor of participating in Paris’s Exposition Universelle.

Birth of the monogram canvas

The latter part of the century was fi lled with a succession of noteworthy events. In 1872, a striped canvas was created to complete the grey Trianon canvas. Three years later, the Wardrobe (a rigid wardrobe trunk) was created. In 1885, shortly after the company celebrated its thirty-year anniversary, the fi rst foreign boutique opened at a very prestigious address: oxford Street in London. This was the fi rst step toward an international success that Louis Vuitton could certainly not have imagined. More than a hundred years later, at the beginning of the 21st century, the trademark was represented on all continents and had assumed its place as one of the world’s most famous “brands”. In 1888, the Damier canvas was introduced, and in 1896 came the “must” that is among the most copied motifs on the planet: the signature Monogram canvas. The succession of generations could not have been smoother. When Louis died in 1892, his son georges Vuitton, creator of the Monogram canvas, as well as the impressive unpickable fi ve tumbler lock, took the helm of the company.

the Keepall, for travelers in the know

During les années folles, just before the First World War, Louis Vuitton became a familiar name among crowned heads and wealthy aesthetes. Just one year into the new century, the Steamer Bag made a name for itself as the fi rst fl exible traveling bag. From 1908 on, it could be found in Nice at the fi rst of the mark’s French boutiques to open outside of Paris, and in 1914 it could be seen at the now emblematic store in the Champs-Élysées. During the period between the two wars, no notable expansion took place, but one date stands out: 1930. Just as the crisis of 1929, slightly delayed, began to threaten France, Louis Vuitton introduced his lucky item: the Keepall. Continually re-introduced, continually re-interpreted by new designers (most recently by the photographer Sylvie Fleury and Japanese artist Takashi Murakami), this supple bag continues to accompany inveterate voyagers and has become a true icone.

In 1959, technical progress permitted backing the Monogram canvas with a waterproof and flexible lining and the supple bags of the Maison Vuitton appeared with their new attire. From Saint-Tropez to Portofino, from the Hamptons to Punta del Este, these bags became inseparable from the places where fashion is made. Despite its international renown, the trademark had just three stores by the middle of the 1970’s. The first steps toward international development began in South-East Asia in the coming years with the opening of sites in Tokyo, Osaka, Hong Kong and Seoul. In 1987, an agreement with Moët-Hennessy made the resulting group under the composite initials of its members, LVMH, a world leader in the realm of luxury. Under the leadership of Bernard Arnault, who took control in 1989, the company’s expansion advanced at a rapid pace in all areas. Its move into China in 1992 at the Palace Hotel symbolized this ambition, which was also expressed through cultural initiatives such as the launch of a literary collection – “Voyager Avec”.

The year 1996 marked the centennial of the Monogram canvas. Aware of its place as an integral part of French heritage, Louis Vuitton re-issued its historic Damier canvas. But this did not prevent the company from moving into other areas: including introducing the men’s line, Taïga, in 1993, and the first prêt-à-porter collection in 1998, designed by a man whose name was on everyone’s lips, Marc Jacobs. The Monogram grew into a family of items with different identities: Monogram Vernis, Monogram Mini, Monogram Glacé, Monogram Graffiti, Monogram Multicolore… In 2000, Louis Vuitton set foot on the African continent, in Marrakech, and has not ceased to continue its expansion which reads like a lesson in geography: India and Russia in 2003, Johannesburg and Shanghai in 2004, Taipei, Kiev and Oslo in 2006, Athenes in 2007, Macao and Oulan Bator in 2009. How could Louis Vuitton ever have conceived of seeing his name and fame spread all the way to the far reaches of Mongolia?

In 2004, the trademark celebrated its 150th anniversary. If it remains matchless in the field of luxury luggage, it also excels in jewelery, sun glasses, prêt-à-porter, footwear and watches. Not content to simply produce, Vuitton has established a unique relationship with contemporary creative talents. Some of today’s greatest artistes have been invited to re-interpret its classics or to design show windows that become unique works (Robert Wilson, Ugo Rondinone, Olafur Eliasson). Its advertising has featured surprising heros such as Mikhaïl Gorbatchev, Keith Richards symbol of the Rolling Stones, astronaut Buz Aldrin and dancer Mikhaïl Baryshnikov. In 2007 and 2008, Louis Vuitton was at the heart of a little cultural revolution when it set up, for the first time, a temporary boutique inside a museum for the Takeshi Murakami retrospective in the Museum of Contemporary Art (MOCA) in Los Angeles, and at New York’s Brooklyn Museum.

…and upholding a tradition of excellence

This perfect synchronization with current times doesn’t mean that Louis Vuitton has abandoned its roots. On the contrary! The legendary Special Order workshop, located in Asnières for more than a century, continues to fill the orders of the most demanding clients, all seeking unique items. Patrick-Louis Vuitton, representing the fifth generation of the family, now directs this department famous for its creations, from the traveling safe of the Prince of Siam in 1924, to the extraordinary jewel box in red Epi leather created in 2005 for the Year of China in France. The result of countless sketches and prototypes, each one of these special orders (some 450 are produced per year) is followed from start to finish by the same craftsman who may devote several months of his time to a project. At Louis Vuitton, time and tradition remain classic values.