The history of haute couture is linked to the history of modern art. The designer is a creator in its own right, and the word « atelier » refers to both the place of expression of the artist and that of the designer.

But the true studio of the artist remains his spirit. It is in this dimension, in balance between dream and reality, between imagination and achievement, that Maria Grazia Chiuri, the Artistic Director of the House’s women’s collections, conducts her research and exploration work. Because haute couture embodies the dream of fashion. It is a place where it is possible to evolve freely to experiment with techniques, materials and forms. Immersing herself in the heart of the surrealist movement allowed her to bring an imaginative breath to this couture-spring-summer 2018 collection, for a change of scenery and a permanent optical reversal.

Surrealism also touches on the words, the evocative texts that guided Maria Grazia Chiuri in the creation of a collection mainly in black and white, dotted with illusions and surprises.

Never trust the first impression … Thus, the large folds of the white evening dress edged with black open like pages, as a book; the cage, a recurrent motif of surrealist works, is transfigured into a network of black tubular fabric that encloses the body and emphasizes the play of transparency, while a fishing net of silver thread mingles with the density of velvet. 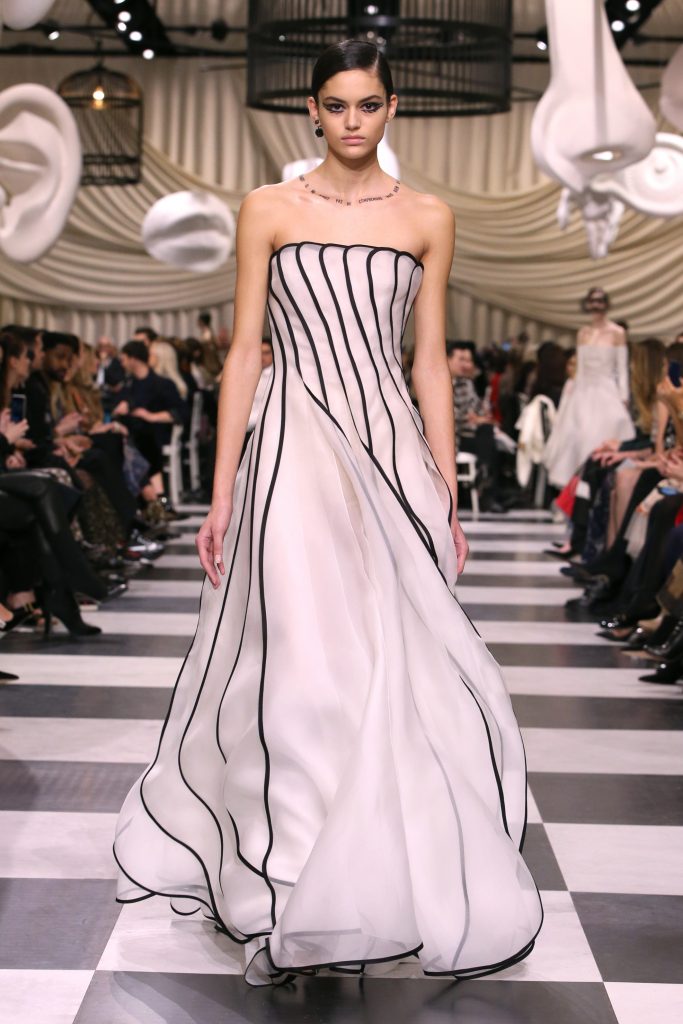 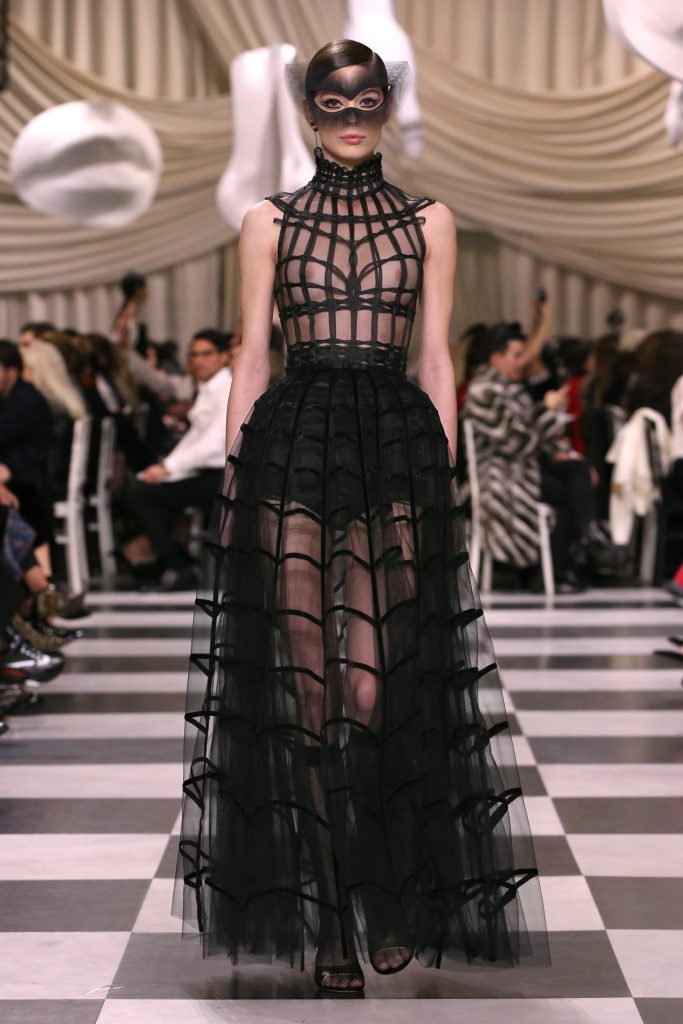 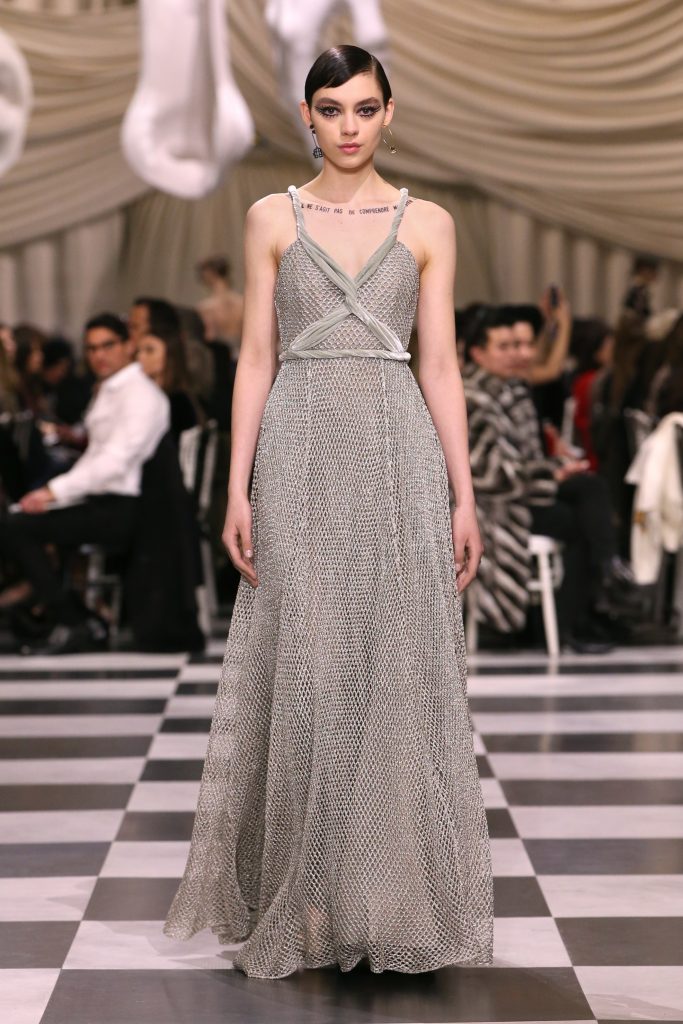 But it is above all the charisma of Leonor Fini that defines the strict and radical attitude of the collection. Leonor Fini, who, after leaving Italy for Paris, had, at the time, organized his first exhibition in Christian Dior’s gallery, with whom she had befriended. During her phantasmagorical appearances, she often wore Dior creations. It was the embodiment of the then revolutionary idea that one must always remain independent and reinvent oneself, thus representing the whole realm of possible realities. She used the clothes to define herself and to stage herself, to assert herself, both in public and private: influential, strict and elegant, in poses borrowed from the male portraits of the Renaissance, in a continuous interaction between life and work of art, mixing the natural and the artificial. It is in this dimension suspended between dream and reality that evolve the wonders of haute couture. 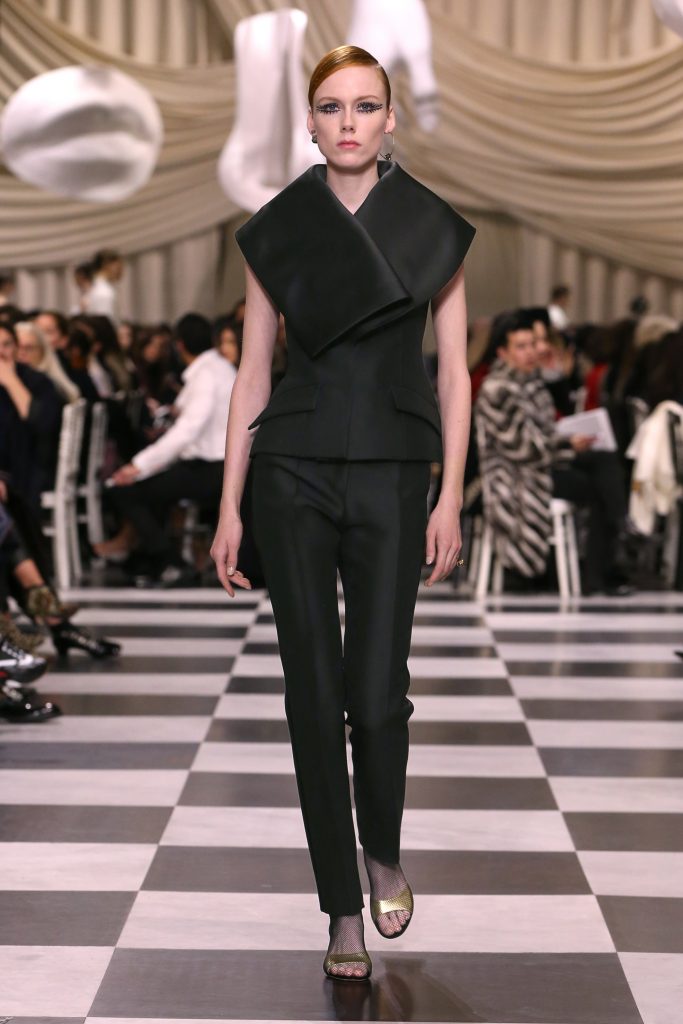 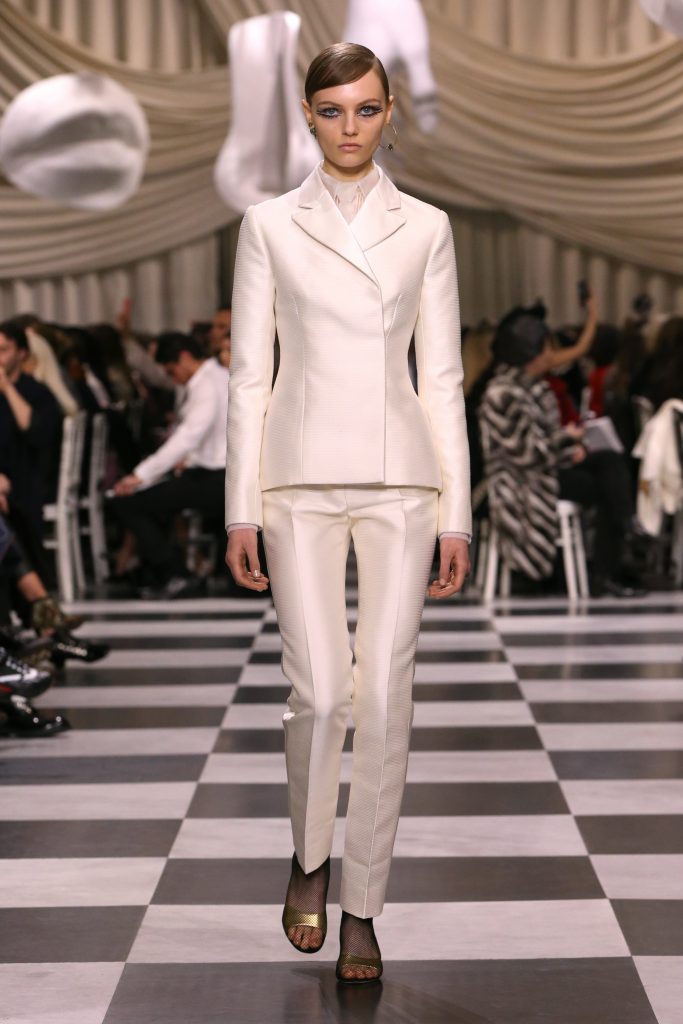 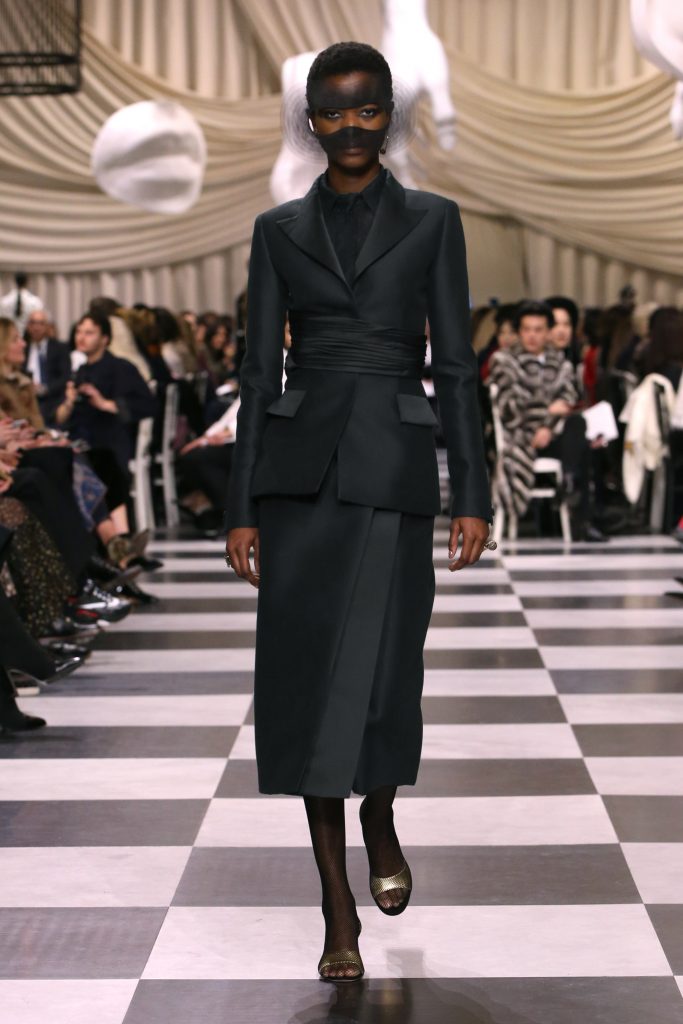 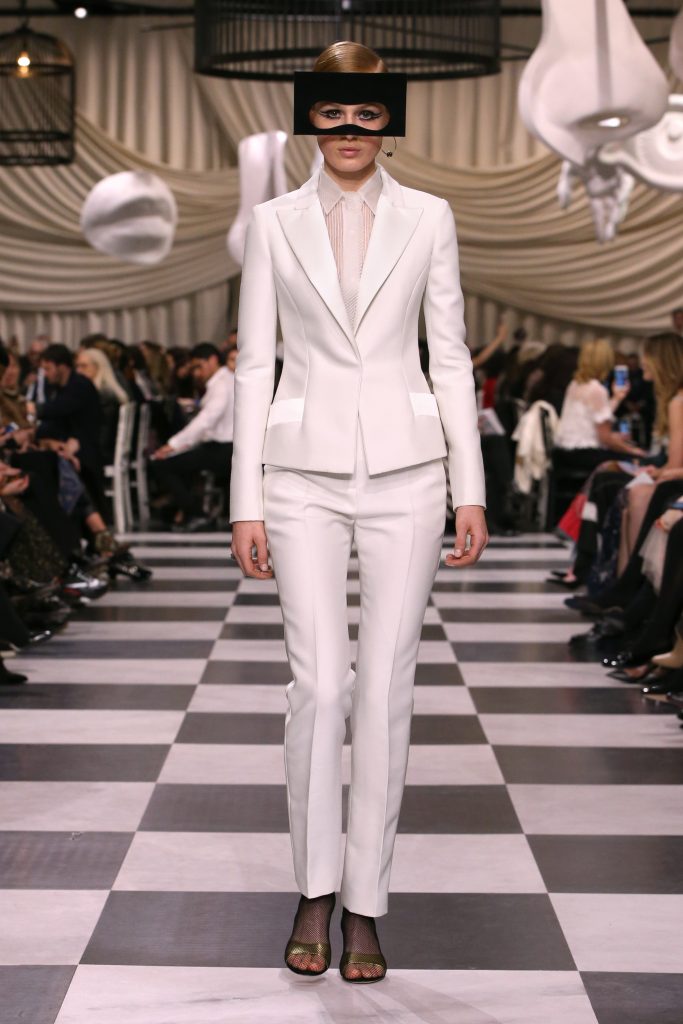 The same goes for daywear, among which Christian Dior has reinterpreted the shapes, especially using the masculine fabrics, and from which Maria Grazia Chiuri is inspired to propose a series of suits. These take the curves of Dior to revive the taste of the day and agree with skirts with multiple contrasts. 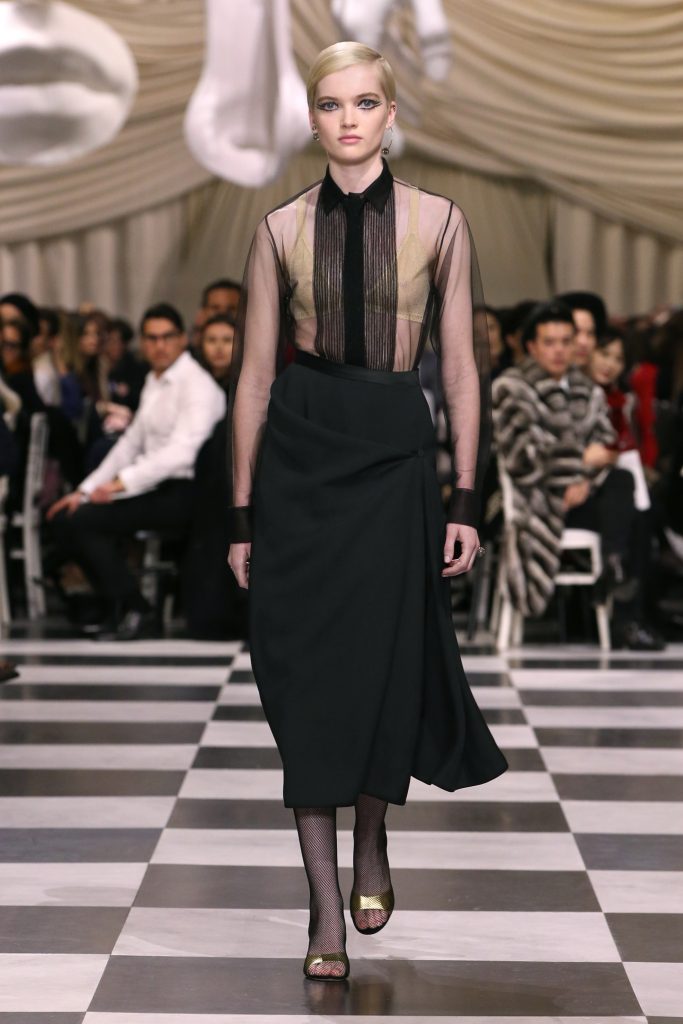 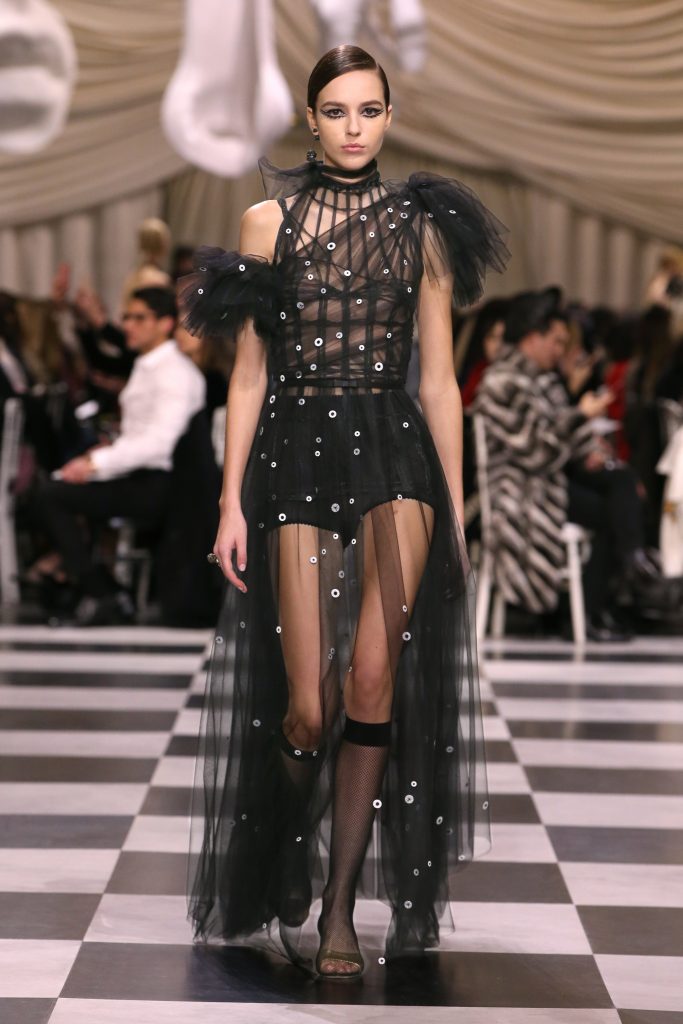 Faithful to the surrealist tradition of deconstructed body fetishism, the accessories mark their presence in a fantastic way: a fishnet stocking veil a sandal, gloves clutch an ankle. It is in this way of seeing and being seen, in this immersed sight in the unconscious and focused on the world that Maria Grazia Chiuri marries embroidery and wonders. 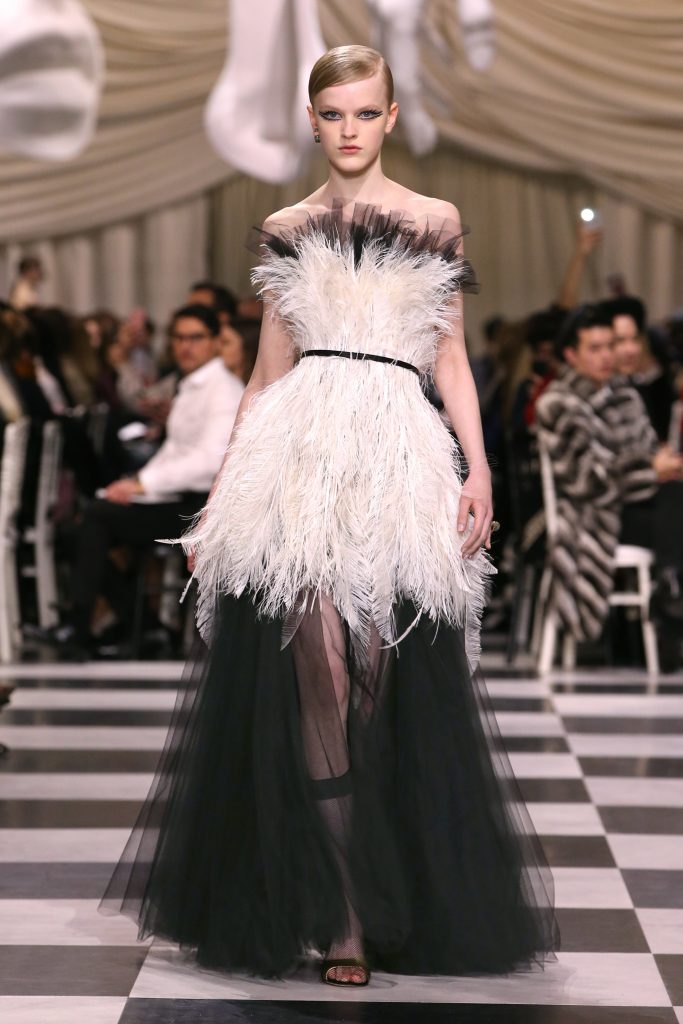 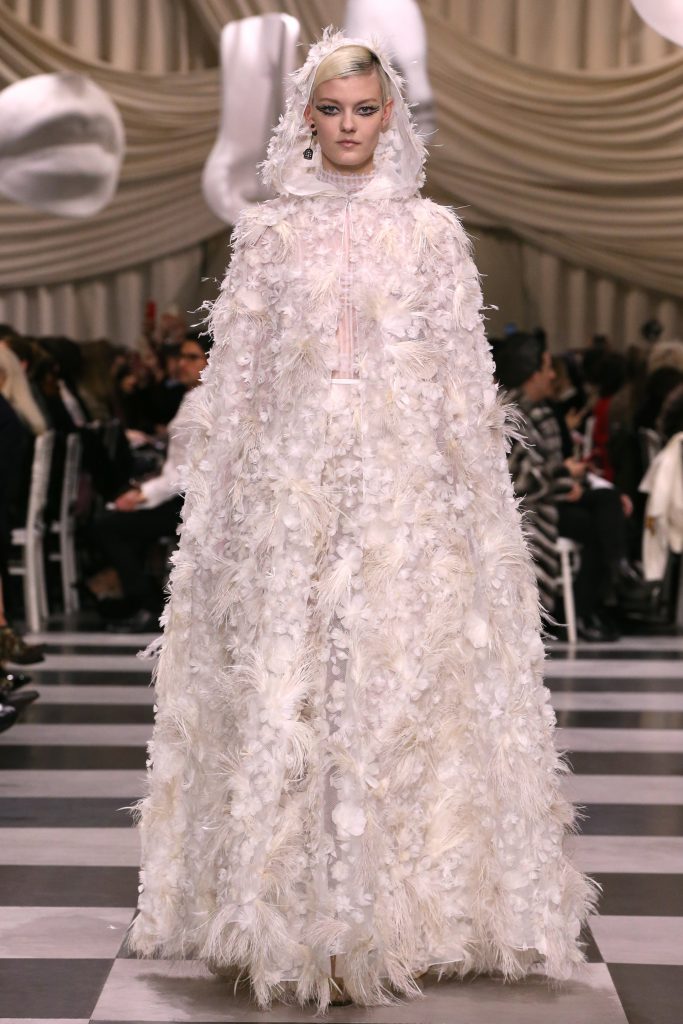 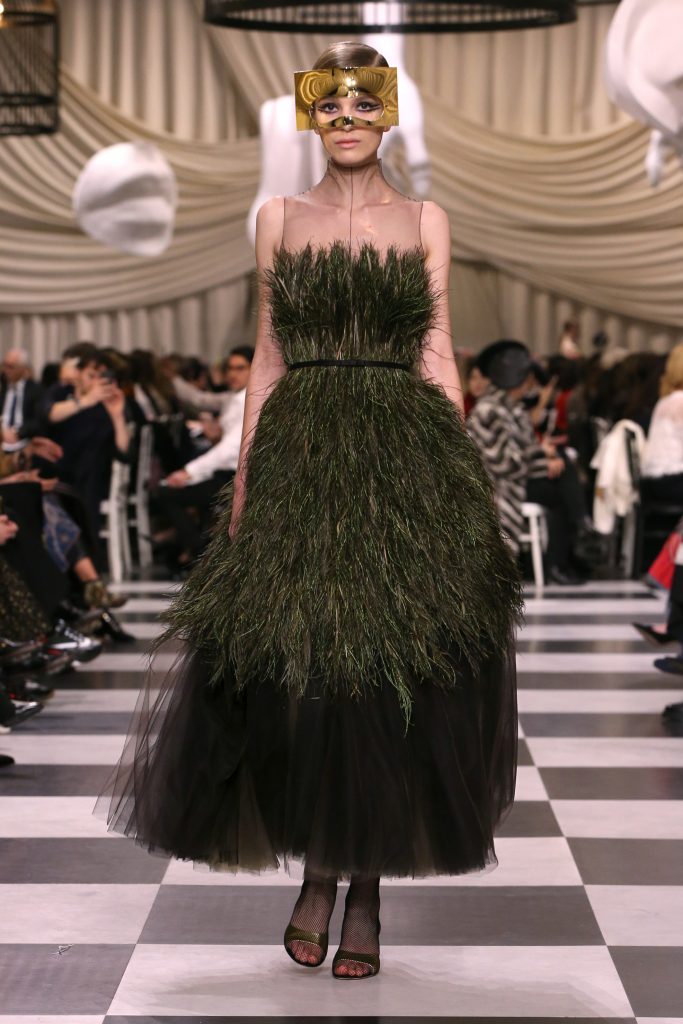 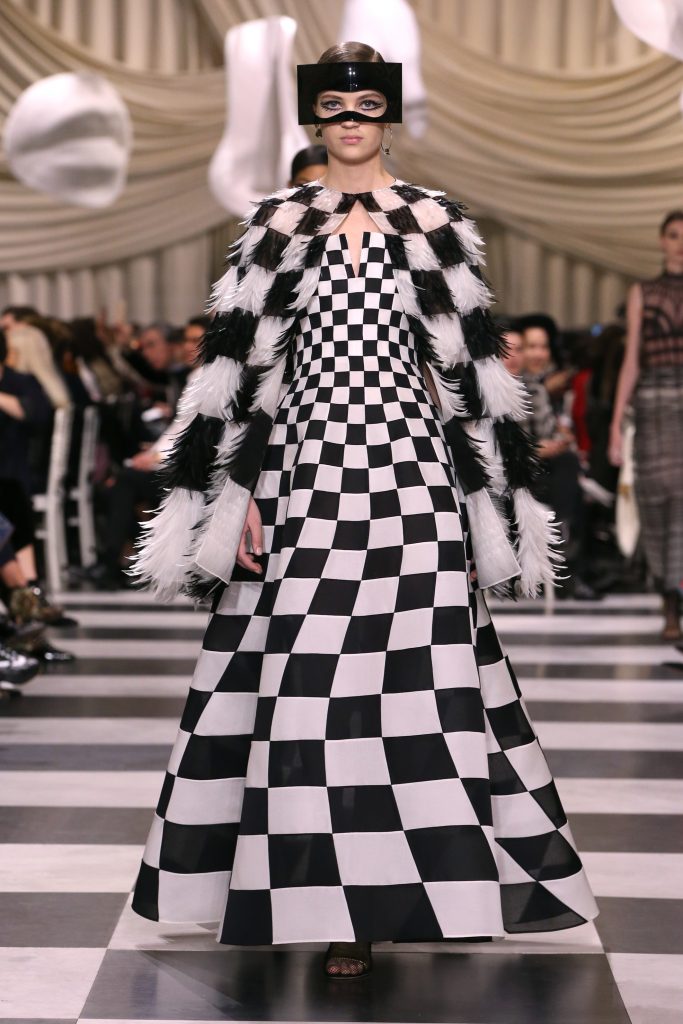 Precious and delicate ornaments that, on a dress inhabited by a flamboyant phantasmagoria of peacock feathers, become eyes that scrutinize and express the mystery, but also the power of the spirituality of women today.