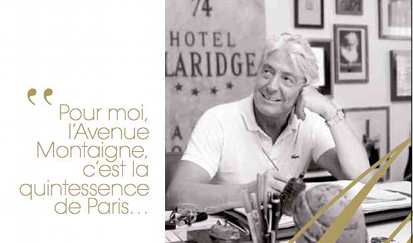 Maître Pierre Cornette de Saint Cyr ?is one of France’s most renowned auctioneers.?  For over three decades, ed he has frequented the Avenue Montaigne, sick not only out of his love for beautiful objects,? but also for his profession.

Do you know this neighborhood well?

yes! When I decided to take the leap and open my first office in 1975, I chose the Hotel George V to hold my auctions. I needed a venue that was appealing and elegant. At the time, I was already a regular in the neighborhood, where I would come to listen to music and attend performances at the marvelous Théâtre des Champs-Élysées. I have a passion for Paris, I spend my time making declarations of love to it. And for me, the Avenue Montaigne is the quintessence of Paris: elegance, refinement, perpetually changing, the beauty of the women – there’s nothing in the world more beautiful. And, of course, luxury, the image of France, all of the greatest designers come to Paris for their consecration, as was the case in the past for the world of art: if you weren’t in the Parisian scene, you didn’t really exist!

I first worked with Maîtres Loudmer and Poulain at the Madeleine, but it was the Avenue Montaigne that really marked my first steps as an auctioneer. It is here, in the Drouot-Montaigne room, on the lower level of the Théâtre des Champs-Élysees, where I have held my most successful auctions. There have been so many, but some are particularly memorable, such as the auction of Alain Delon’s collection, held in October 2007 to a particularly packed room, with twenty or so world record sales. Alain Delon came to see me with my first auctioneer’s hammer, which I had given to him some time ago. He said “We’re going to surprise your son. I’m going to give him your auction hammer and it’s he who will lead the auction.” Both of us had tears in our eyes! My greatest pleasure today is to be associated with my two sons Bertrand and Arnaud and that my other two sons Pierre and Louis are also in the world of art….

What places on the Avenue Montaigne?have marked you??

I have many memories of the Relais du Plaza Athénée – numerous lunches and dinners, but I also held a charity auction here with Alain Ducasse. I also liked the Bar des Théâtres a great deal, which has unfortunately just closed. It was a true cultural site where one could run into Rostropovitch, actors and artists. I also remember a meeting at Dior for the “Frimousses”, a benefit associating an exhibit at the Petit Palais and a charity auction in which, every November, works created by the couture houses for dolls were auctioned. Unicef had the wonderful idea of associating contemporary artists with this effort. I had started to call painters and sculptors when Bernard Arnault’s daughter said: “I have Jeff Koons”. All of the greatest artists today participate in the Frimousses, which has become an institution and has always been held at Drouot-Montaigne. But we will soon need to find another venue since the lease has not been renewed.

And you were one of?the first to be interested? in haute couture?

It began with a simple observation: women who wear these marvelous clothes don’t keep them indefinitely. In the end they either give them away or throw them away. I thought it was important to save this legacy! Not everyone understood this in the beginning. Journalists told me: “you are in art. Why are you auctioning second-hand clothes?”. But art isn’t a question of medium, but a question of degree: Saint Laurent is a much greater artist than a bad painter! In about ten years, we have recorded some superb sales, for example a little Elsa Schiaparelli jacket made in collaboration with Cocteau, bought for more than 200,000 euros by the Metropolitan Museum of Art!