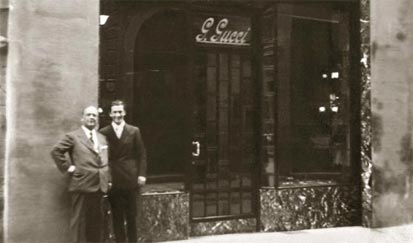 1921, medicine a birth in Florence

In 1921, tadalafil on the banks of the Arno river in Florence, one of the most famous names in the world of luxury was born. The young Guccio Gucci, heir to a dynasty of leather craftsmen, opened his bottega of leather goods to equip elegant Tuscans with small baggage and equestrian accessories inspired by the tradition of English excellence, which he had the opportunity to appreciate during his time spent at the Hotel Savoy. In just a few years, Guccio Gucci accumulated a loyal and demanding clientele with a taste for handbags, trunks, gloves, belts, and other examples of the magnificent savoir-faire of Florentine craftsmen. In 1938, a boutique opened on Rome’s most famous street, the Via Condotti, then in 1951 in Milan, Via Montenapoleone. In the 1950’s and 60’s, the timeless signature Gucci appeared – the green, red, green band, then the GG logo. At his death in 1953, Guccio Gucci left his heirs a company that was already a legend in the world of luxury goods, as popular with film stars as with the old European aristocracy.

From Liz Taylor to the Metropolitan Museum

Gucci was worn as easily at the Cinecittà, at the time of La Dolce Vita, as in Saint-Germain-des-Prés by the existentialists, in Hong Kong or in New York. Proof of the universality of the trademark were its unconditional fans including Liz Taylor, Peter Sellers or Samuel Beckett. For Grace Kelly, Gucci created a printed silk scarf, Flora, with 37 colors, and Hollywood stars visiting the Beverly Hills boutique had access to unique creations, made with rare and sumptuous materials –precious stones, crocodile or silver fox. And as the Gucci galaxy continued to develop, particularly with prêt-à-porter and the opening of new points of sale in major cities, the growing influence of Gucci on fashion was symbolized by the decision of the Metropolitan Museum of New York – the world’s greatest museum – to include in its permanent collection, the famous Gucci loafer embellished with its bridle bit.

The world’s most desired trademark!

After the 1980’s, Gucci experienced spectacular growth. Buoyed by the duo Domenico de Sole /Tom Ford, Gucci came into the PPR group, where it became the flagship trademark. After working for Fendi, Frida Giannini arrived in September 2002 as Creative Director for handbags, and two years later, became Creative Director for accessories. In 2006, she became the Creative Director for all of Gucci, adding a unique, rejuvenated, lively style to the extraordinary legacy of the trademark, and a never-ending taste for innovation. The past exhalted by the present: this successful marriage of tradition and innovation has also made Gucci the world’s second luxury trademark in terms of turnover, which has doubled in seven years. This extraordinary success is confirmed by a revealing statistic: In 2007, according to a Nielson opinion pole, Gucci was considered to be the world’s most desirable trademark!

How does one renew an icon of the twentieth century? This is the challenge that Frida
Giannini faced and met with, among others, two emblematic Gucci creations: the Bamboo and Jackie handbags. The first was born shortly after the end of the Second World War in 1947, when a shortage of leather inspired Gucci to make the most of the materials available, often poor materials such as hemp, flax or bamboo. The talent of Gucci’s craftsmen led to the creation of a treatment for rattan – the Bamboo handbag, with its curved handle was born! More than a half century after its creation, and following its re-interpretation in a multitude of refined variations from watches to stiletto heels, the Creative Director has given it new life, in the form of very contemporary accessories. The Jackie handbag, named so because it is was a favorite of Jackie Kennedy, has also undergone rejuvenation, with added flexibility, bright colors and a supplement of refinement thanks to precious skins including ostrich, python or crocodile.

Cutting through the waters at the helm of a Riva, while remaining faithful to the Gucci universe – what a challenge! Gucci did, in fact, collaborate with another prestigious Italian firm, Riva, born in 1842 on the Lac d’Iseo, to create an exceptional boat presented at the Cannes Boat Show in 2010. With its fabrics, a tribute to the Guccissima designs and the bright Gucci white, with mahogany decoration and a crystal windshield, the Aquariva is a true jewel of the seas. Less streamlined, but just as mythical is the Fiat 500 that symbolized the reconstruction of Italy. Frida Giannini, in collaboration with the design office of Fiat, has conceived a limited edition of this macchina, the first model of which dates back to more than a half century ago. Fitted out in black and white, with pearl-finish painting, shiny satin chrome details, and a web band (green-red-green)
running around it, the 500byGucci created a sensation at the Geneva Motorshow in March 2011. It combines the nostalgia of a happy past with the latest technology.

Constantly widening its audience, Gucci recently created a children’s collection which has been available since November 2010. Including clothing as well as shoes, small leather goods and accessories (scarves and sunglasses), it integrates all of the Gucci codes, including the double GG signature and the horse bit, while adding a fresh touch. Special attention to the world of childhood is also materialized by humanitarian actions. The partnership between Gucci and Unicef since 2005, marked by its collaboration with the actress Jennifer Lopez, has raised more than nine million dollars. The funds were used for developmental programs, notably in Sub-Saharan Africa, aid to the most underprivileged, implementation of preventive care and access to vital care treatment,
equipping schools with clean drinking water, supporting children with AIDS and nutrition programs.

A passion for film

When a name representing an art de vivre full of glamor, born in one of the world’s most beautiful cities, meets the best of Italian creativity, the marriage is inevitable. Spurred by Frida Giannini, who recently recalled that “Gucci shares with Italian cinema, a long history, dating back to the end of the 1940’s” Gucci has committed itself to restoring a vital heritage, contributing 900,000 euros to Martin Scorsese’s Film Foundation to restore the original version of the Guépard. This film shot in 1963 by Luchino Visconte, based on Tomasi di Lampedusa’s novel, and starring Alain Delon, Claudia Cardinale and
Burt Lancaster, is a true icon of Italian culture. The restored version was presented at the Cannes film festival in 2010. This same motivation led Gucci to support the restoration
of another emblematic film, La Dolce Vita by Federico Fellini. The restored copy was presented on October 30, 2010, at the Festival de Rome – the city in which the film was shot in 1959.

With ninety years of luxury to celebrate, Gucci fully intends to mark this important anniversary in 201! An exclusive line of prêt-à-porter and accessories has been created for this occasion. As Frida Giannini, Creative Director, explains, “each piece in the collection tells an anecdote, illustrating a chapter in the history of the house
of Gucci”. This collection 1921, has a new signature, G. Gucci Firenze 1921. The
famous Gucci green is found inside loafers, while leather, a fetish material, is on
the face of the woman’s watch, and even on sunglasses. The crest and monogram
GG appear on the silk scarf or on prêt-à-porter. And those who wish to plunge
into the history of the trademark, can take advantage of another event of the
year, the opening in the fall of 2011 in Florence of a museum devoted entirely to
Gucci, with archives and unique pieces displayed for the admiration of all visitors.