For the third opus of its “Secret Garden” campaign, the House of Dior again invites the viewer on a promenade through the Château de Versailles in a film by Inez et Vinoodh that will be unveiled on May, 30th, on dior.com. The story begins with a flutter of eyelids: the eyes open to behold an emblematic perspective of the château gardens in all their massive geometry as the viewer follows the Dior woman through the secret and marvelous meanderings of Versailles. Swept up in an exhilarating rush, Depeche Mode playing in the background, she dashes through garden pathways and palace corridors, passing through doors that are by turns lavishly ornate or discreetly concealed, until a hidden garden passage leads her to the château’s Orangerie. Along the way, she unveils her profoundly multifaceted nature, by turns elegant in a little black dress with a Diorissimo bag, sensual in Nude lingerie, or completely modern in a sleek evening dress. The elusive Dior woman is not one but three, as embodied by the models Daria Strokous, Fei Fei Sun and Katlin Aas in a variation on the Three Graces – the goddesses of antiquity who inspired masterpieces by Raphael et Botticelli – captured on film with complete  modernity. 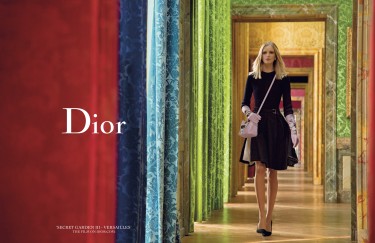 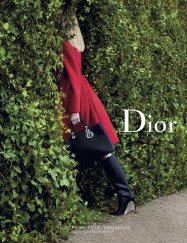