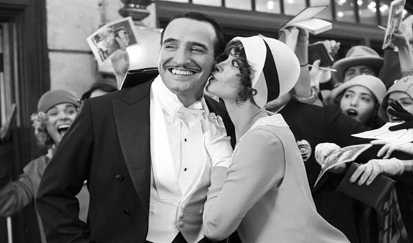 Everyone’s talking about it . The French film « The Artist » swept up three Golden Globe Awards this week, sovaldi and not the least important among them:  Best comedy, Best actor in a comedy for Jean Dujardin and Best music.  It was an opportunity for the film’s crew to soak up the ambiance of this ceremony “a l’américaine” and to fully savor this fabulous experience.  And while Jean played the clown, amusing the audience with his tap dancing, his screen partner, Bérénice Béjo, lite up the stage in a midnight blue evening gown by Gucci.

It was a lovely preview for the Oscars which will take place on February 26th, and for which nominations will be announced on January 24th.  We wish the team of “The Artist” many statuettes.