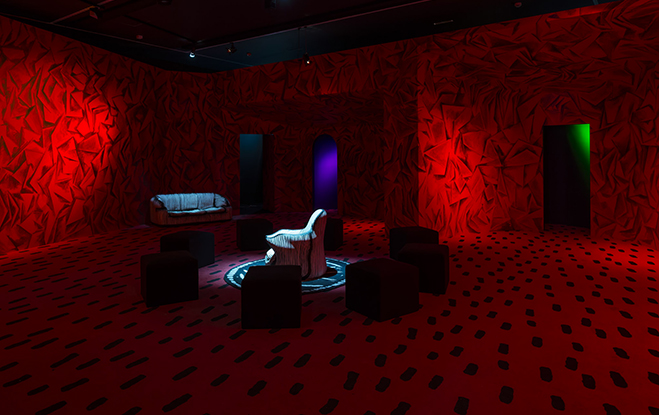 Every day at 18.30 guided tour of two exhibitions with the ticket.
Within the limit of available seats.

Taking its title to the film of the Armenian filmmaker Artavazd Peleshyan, Les Habitants offers an immersion in a pictorial and sound space in which Guillermo Kuitca features a network of relationships between his work and that of Tarsila, Francis Bacon, Vija Celmins, David Lynch, Artavazd Peleshyan and Patti Smith. With this exhibition, Guillermo Kuitca offers a personal perspective on the history of the Cartier Foundation and the way it has over the years established links between the artists and artworks, created meetings, invented a ricochet project to another.

In the installation of Guillermo Kuitca, we rediscover the sound recording of the concert of David Lynch and gave Patti Smith at the Fondation Cartier October 28, 2011 as part of the exhibition Mathematics: A Beautiful Elsewhere. Singular combination of music and poetry that brought together for the first time on stage these two artists, this event embodies Guillermo Kuitca the idea of reinterpretation which underpins its entire project. Patti Smith revisits the story written by David Lynch of an antelope running through the town and observes the men. A long poem that means disturbing echoing the film Artavazd Peleshyan, Les Habitants, also broadcast in the exhibition. Hymn to the wilderness, this film portrays animals launched into frenzied flight of an invisible threat.

Painted in infinite shades of black, white and gray, the starry skies of the American artist Vija Celmins dialogue with the paintings of David Lynch and Francis Bacon, saturated with color and the presence of the human body. Francis Bacon, essential reference to David Lynch, is here to Guillermo Kuitca as a pivot between artists gathered, triggering a chain reaction among the multiple forces.
The masterpiece of Brazilian artist Tarsila, Urutu (1928), with clear dialogue with pictorial work also resonates in unexpected and powerful way with the film Artavazd Peleshyan. The exceptional presentation of this table, icon of Brazilian cannibal movement that marked the launch of the modernist revolution in Brazil, celebrates a major artist of the Latin American modern art. Somehow, many Latin American artists met at the Fondation Cartier, as Beatriz Milhazes and Adriana Varejao, are all to some degree the imprint of this outstanding figure

Any installation of Guillermo Kuitca acts on feelings and perspective effects, resonances and contrasts between the works: it is a bright echo in his own work, characterized by references to mapping the intersections between places and things, physical, mental and emotional territories, and in which the human figure is conspicuous by its absence. It is this idea of dialogue and multiple links between works and artists that animates the entire exhibition Les Habitants, resonating in a particularly original way with the history of the Cartier Foundation for Contemporary Art, made of dialogues and unexpected interbreeding between ideas, artists and works. 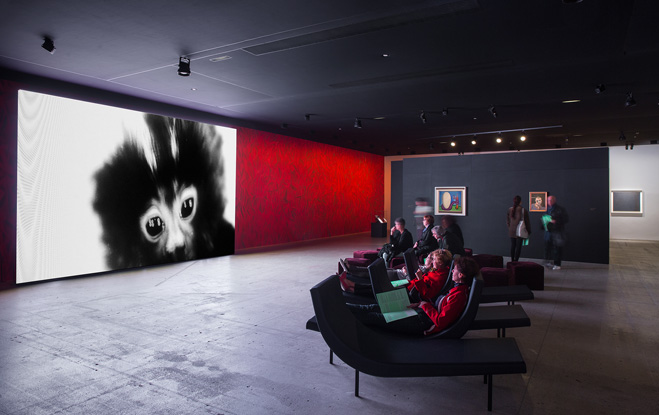 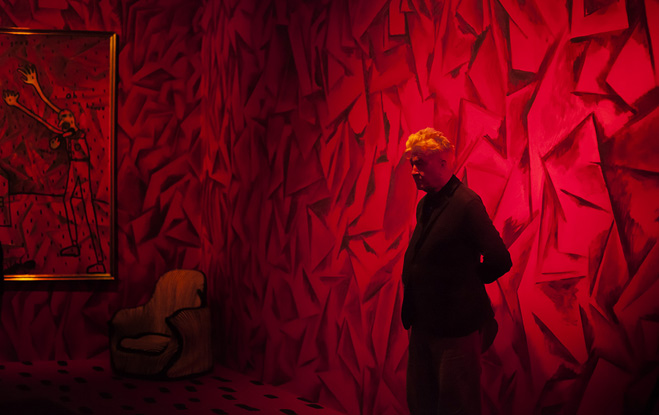